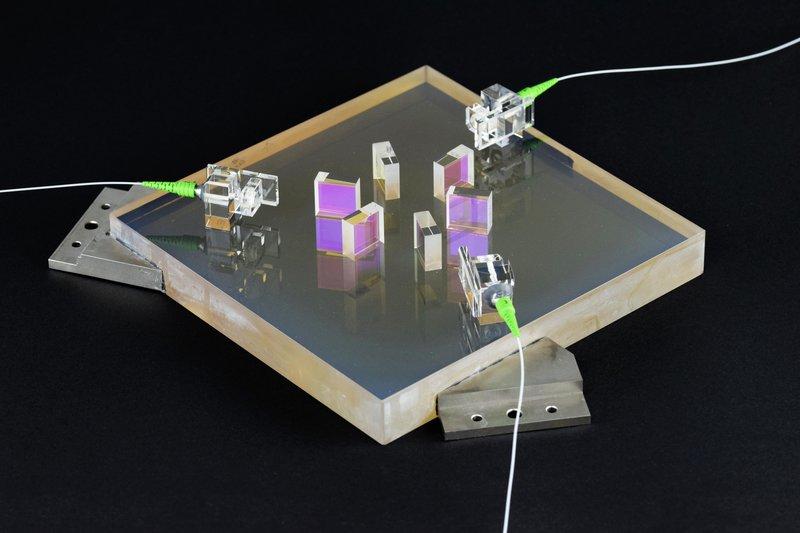 “All components of the planned LISA space observatory must meet strict precision requirements to measure gravitational waves,” says Dr. Thomas Schwarze, lead author of the article published today in the renowned journal Physical Review Letters. “Creating conditions in a laboratory under which the enormous precision for LISA can be verified requires great care. For the first time, we can test an important part of LISA technology under almost realistic mission conditions in our laboratories and show that it works as intended.”

LISA – a gravitational-wave observatory in space

LISA is scheduled to launch into space in 2034 as a mission of the European Space Agency (ESA). The mission will consist of three satellites that will create an equilateral laser triangle with each side approximately 2.5 million kilometers long. The distances of this formation flight in space are changed by a trillionth of a meter by gravitational waves.

To detect these tiny changes, instruments (phasemeters) in the LISA satellites monitor and measure the laser light exchanged between them. This measurement has to be performed with highest precision – like an extremely accurate microphone with low noise and low distortion – over a large range of 8 to 10 orders of magnitude.

Testing LISA measurements in a laboratory

In their article, the researchers describe a new experimental setup which, for the first time, enables laser-based LISA measurements in a laboratory under almost realistic mission conditions and use it to verify the accuracy of the phasemeter.

The setup consists of an optical bench which, due to its special construction, is highly precise and stable and thus eliminates all undesirable noise sources ten times better than previous experiments. The required LISA accuracy in the trillionth of a meter range can thus be achieved.

On the optical bench, three laser beams produced in a controlled manner are superimposed in pairs in order to obtain six new laser beams with precisely defined properties. By skillfully superimposing three of these mixed beams and measuring their properties with the phasemeter, its function can be precisely checked.

The phasemeter tested with the setup meets the mission requirements almost throughout LISA’s entire measurement range. This successful test is the first under almost realistic conditions. It shows that with the new setup and with small modifications, further central components of the LISA mission can be tested under even more realistic conditions.

“It’s crucial to understand all the details of the LISA mission precisely and to test them in advance in the laboratory,” explains Prof. Gerhard Heinzel, leader of the research group for space interferometry at AEI Hannover. “Only in this way can we be sure that the complex mission will work as planned. Once the satellites are in orbit around the Sun, we can no longer modify the hardware.”

LISA will measure low-frequency gravitational waves with oscillation periods from 10 seconds to more than half a day, which cannot be observed with detectors on Earth. Such gravitational waves are emitted, for example, by supermassive black holes, millions of times heavier than our Sun, which merge at the centers of galaxies, the orbital movements of tens of thousands of binary stars in our Galaxy, and possibly from exotic sources such as cosmic strings and the echo of the Big Bang.

Between December 2015 and July 2017, the LISA Pathfinder mission demonstrated other LISA components in space and showed that they exceeded requirements throughout the LISA measurement band.

ESA is currently conducting the Phase A system study with the international LISA consortium. A preliminary design of the space components is to be developed in preparation for the mission.