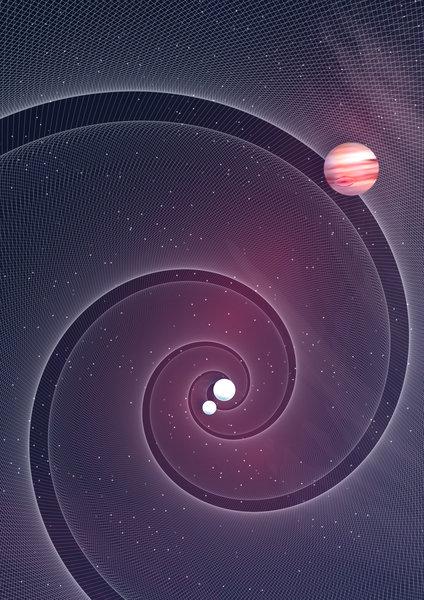 In a recent paper in Nature Astronomy, researchers from the Max Planck Institute for Gravitational Physics (Albert Einstein Institute/AEI) in Potsdam and from the French Alternative Energies and Atomic Energy Commission (CEA) in Saclay, Paris suggest how the planned space-based gravitational-wave observatory LISA can detect exoplanets orbiting white dwarf binaries everywhere in our Milky Way and in the nearby Magellanic Clouds. This new method will overcome certain limitations of current electromagnetic detection techniques and might allow LISA to detect planets down to 50 Earth masses.

In a paper to be published in Nature Astronomy on monday, Dr. Nicola Tamanini, researcher at the AEI in Potsdam and his colleague Dr. Camilla Danielski, researcher at the CEA/Saclay (Paris) show how these limitations may be overcome by gravitational-wave astronomy. “We propose a method which uses gravitational waves to find exoplanets that orbit binary white dwarf stars”, says Nicola Tamanini. White dwarfs are very old and small remnants of stars once similar to our Sun. “LISA will measure gravitational waves from thousands of white dwarf binaries. When a planet is orbiting such a pair of white dwarfs, the observed gravitational-wave pattern will look different compared to the one of a binary without a planet. This characteristic change in the gravitational waveforms will enable us to discover exoplanets.”

In their paper, Tamanini and Danielski show that the upcoming ESA mission LISA (Laser Interferometer Space Antenna), scheduled for launch in 2034, can detect Jupiter-mass exoplanets around white dwarf binaries everywhere in our Galaxy, overcoming the limitations in distance of electromagnetic telescopes. Furthermore, they point out that LISA will have the potential to detect those exoplanets also in nearby galaxies, possibly leading to the discovery of the first extragalactic bound exoplanet.

“LISA is going to target an exoplanet population yet completely unprobed”, explains Tamanini. “From a theoretical perspective nothing prevents the presence of exoplanets around compact binary white dwarfs.” If these systems exist and are found by LISA, scientists will obtain new data to further develop planetary evolution theory. They will better understand the conditions under which a planet can survive the stellar red-giant phase(s) and will also test the existence of a second generation of planets, i.e., planets that form after the red-giant phase.

On the other hand, if LISA does not detect exoplanets orbiting white dwarf binaries, the scientists will be able to set constraints on the final stage of planetary evolution in the Milky Way.