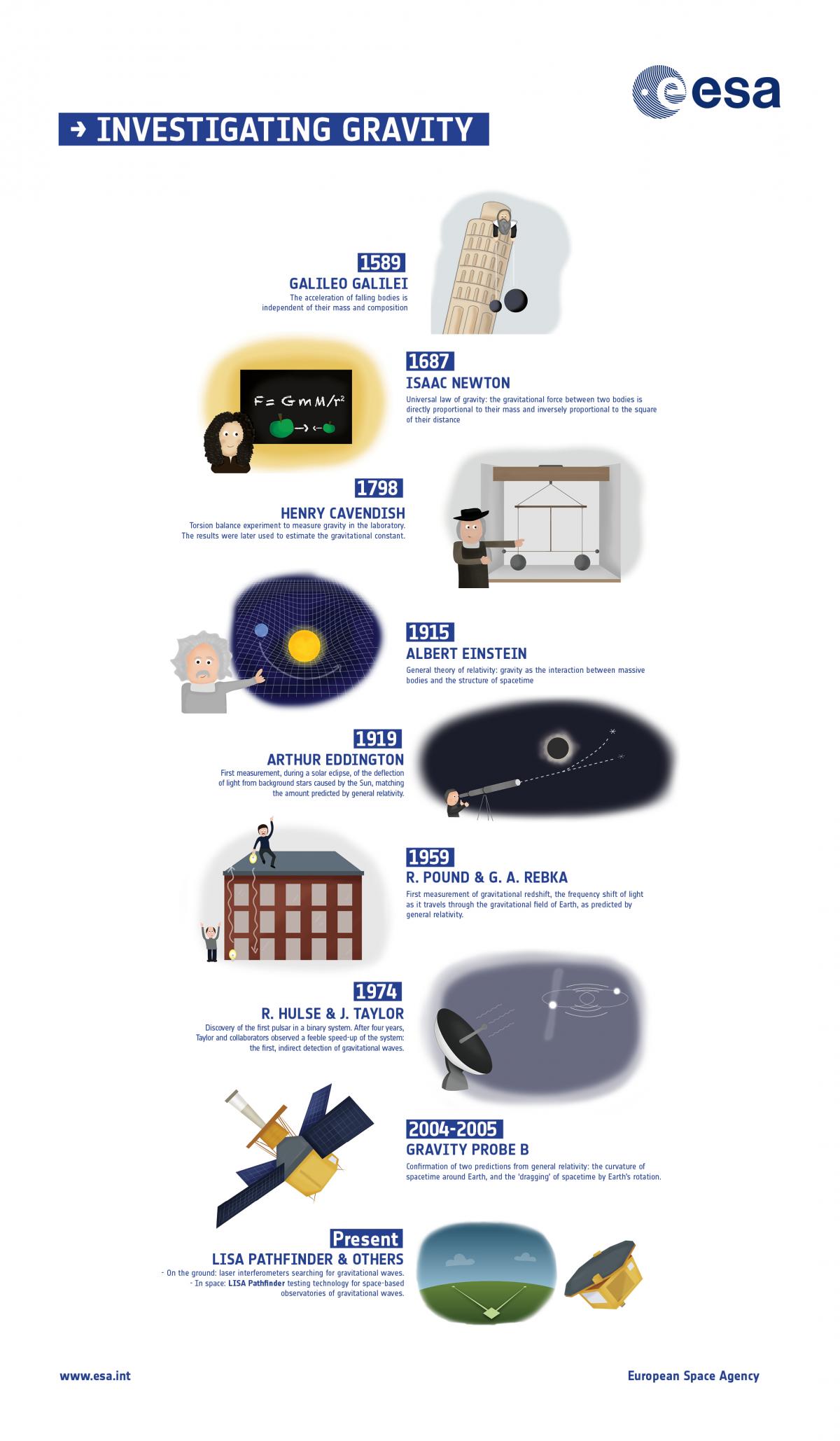 ESA's LISA Pathfinder, a technology-demonstration mission which will pave the way for future observatories of gravitational waves in space, takes its place in the history of great physics experiments investigating the nature of gravity.

In the modern era (from about 1500 onwards), the scientific investigation of gravity began with Galileo Galilei. At the end of the sixteenth century, Galileo demonstrated that objects of different mass and composition experience the same acceleration due to gravity. While legend tells of him dropping differently sized objects off the leaning tower of Pisa, he in fact performed this experiment by rolling spheres down inclined plains in a laboratory setting.

In 1687, Isaac Newton developed the mathematical formalism to describe the mutual attraction of massive bodies, formulating the universal law of gravitation. Just over a century later, Henry Cavendish obtained the first experimental measurement of gravity between two test masses in the laboratory, using a torsion balance. He used this result to calculate the density of Earth, obtaining a value within a few percent of current measurements. In the nineteenth century, physicists used Cavendish’s results to estimate the gravitational constant, G.

Newton's formalism describes gravity as a long-range attractive force, acting between any two massive objects, but this approach would later give way to a broader and entirely different way to view the gravitational interaction, when Albert Einstein presented his General Theory of Relativity in 1915. In Einstein's formalism, massive objects bend the structure of the curved spacetime they are embedded in, and gravity is manifested as the dynamic interaction between matter and spacetime.

One consequence of general relativity was a new prediction of the amount of distortion that would be experienced by light rays as they travel in the vicinity of a massive body. This gravitational deflection of light was first demonstrated by Arthur Eddington and collaborators, during a solar eclipse in 1919, thus confirming Einstein's theory of gravity.

Another prediction of general relativity is that even the energy of light changes as a function of gravity. This effect, called gravitational redshift, was first verified experimentally by Robert Pound and Glen A. Rebka. They measured a minuscule shift – by only a few parts in 1015 – in the energy of light emitted and absorbed by two samples of iron between the basement and the roof of the same building.

In general relativity, massive bodies not only bend spacetime but, if suitably accelerated, they can also generate minute fluctuations in its fabric. These fluctuations are gravitational waves, which are believed to propagate across the Universe at the speed of light. While they have not yet been detected, an indirect proof of the existence of gravitational waves was obtained in the late 1970s by observing the feeble speeding up of two neutron stars, one of which is observable as a pulsar, in a binary system discovered in 1974 by Russell A. Hulse and Joseph H. Taylor Jr.

In addition to experiments conducted on the ground or by observing the cosmos, the dawn of the space age in the second half of the twentieth century provided a new, unique experimental environment for scientists to test gravity far away from the attraction of Earth. Several satellites were launched to test a number of predictions from general relativity, culminating in NASA's Gravity Probe B mission, which operated between 2004 and 2005.

One of the phenomena predicted by Einstein's theory and measured by Gravity Probe B is the curvature of spacetime produced by the mass of Earth. The mission was also designed to demonstrate the Lense-Thirring effect, or the fact that spacetime is dragged along by the rotation of Earth, leading to a precession (a change in the orientation of the axis of rotation) that was observed on the gyroscope on the satellite. However, a first robust indication of the Lense-Thirring effect was obtained in 2002 using data from the LAGEOS and LAGEOS II satellites.